I, like many others in anime circles that I visit, have a great appreciation for the classics, more specifically 90’s anime. Many reasons can go into that admiration, such as the detail for the animation, the amount of raw energy that displayed with each of the frames, the condensed and well told story lines that were unbelievably satisfying and better yet had stuck with you even after forgoing to re watch 5-10 years from when you first viewed it. To me, there is a lot more what just premiered on Toonami, but the experiences you would engage in after looking towards genres and shows that would discover there was a lot of titles that weren’t as commercially successful or as recognized as the ones you remember more fondly such as Cowboy Bebop, Outlaw Star, Slayers, Sailor Moon, etc., but I believe are just as good. There are some of the titles that I’ve discovered from when I was a kid up to my adult years, and I have carried with me and owe to my further exploration of anime, and not just sticking to the norm or the mainstream, and ones that I highly recommend you check out. These are in no particular order and are all opinion based.

The modern era has almost everything that delivers the sense of convenience and automatic satisfaction with whatever activity they engage in, and transportation is a major factor in this, thanks to services like Uber, driving seems no longer necessary to some. In eX-Driver, this concept is pushed into more advanced territory with every person on earth no longer seeing the need for driving manually and have almost completely gotten rid off gasoline addled vehicles, and have instead built self automated electronic cars outfitted with A.I. that will drive them to any destination that they see fit in less time then they could drive themselves. Occasionally these cars go out of control,leading to deadly accidents or even public destruction. Enter the group known as the eX-Drivers, a special organization that use the last remaining gasoline cars on earth and attempt to stop the rogue A.I.s using great driving techniques and strategies that involve street layout and vehicle statistics. The anime follows the young eX-drivers of calm and collected Lorna, hotblooded and passionate Lisa, and driving prodigy Souichi, and their various missions saving citizens around the city. One of my favorite parts of this anime is the character designer is done by Kosuke Fujushima, famous for his creation of Ah My Goddess!, and his work on the Tales franchise. The OVA anime is only 6 episodes long, but with every one having the right amount of high speed action with stellar energy in its hand drawn animation, which was sadly switched out for CG in the movie. This anime is still a great part of my collection, with a subtle message to society and its over usage on technology that more or less holds up even today.

Golden Boy is an anime that I keep coming back to no matter how many times I viewed and one of the first anime I viewed outside of Dragon Ball Z, and often find myself unconsciously dubbing the audio just to see how much of the lines I can recall of the top of my head. The story follows Keitaro Oe, a Tokyo University dropout who travels all around Japan taking on various odd jobs whenever he can learning more about the world around him, and always ends up falling for or attracting the attention of a beautiful female at his workplace, ranging from the head of a software development company, to a shady high school girl, an Olympic gold medal swimming coach, and a noble daughter with a fetish for motorcycles. The usual formula has the girls going from giving him the cold shoulder, to hating his guts, and then eventually falling for him. Yes, this happens with ALL of them.This is borderline hentai at its finest with a plethora of vulgar jokes and smut, but all of which are done with such a great comedic and hilarious approach and delivery(mainly performed by Keitaro both intentionally and unintentionally), you’ll too busy laughing to even be offended by it. The animation is superp with the facial expressions done by the Golden Boy himself always a joy to look out with detailed it is. The anime has only had 6 episodes, with manga ending a few years back at about 94 chapters, which is pretty good considering its content, though to save you a headache, I recommend just watching the anime. It’s a funny, and smart anime that will not only have you busting your gut laughing, but will constantly ask the question for Keitaro, “How does he do it?!” I remember seeing the preview for this anime in the trailers section for Tekken The Motion Picutre, and found myself replaying it over and over for how dope sounding the opening was, and then looked into the anime second. I then found myself the chance to check it out from when Blockbuster was still a thing. Sadly I started halfway through the series and had no literally no earthly clue what was going on, or who anybody was in it. From then on, I made it a priority to find and get any DVD relating to this anime that came before the one I rented out over the next few years, and it was worth it(and that opening, oh my goodness, it so good). The anime follows the misadventure of a group aptly named the Sorcerer Hunters, who go across the land of the Spooner Continent hunting down corrupt demons, evil creatures, and as the name implies, Sorcerers who exploit, perform black magic and other dastardly deeds on innocents. It follows the perverted Carrot, his little brother and pretty boy Marron, his self proclaimed fiancee and voluptuous Chocolate, her sister and magic expert Tira, and tough guy Gateau. The anime has them going from town to town usually after a target given to them by their boss Big Mama. It exists as a parody of sorts of most fantasy anime that was out at the time, such as Slayers, and makes fun of its many tropes. It is very entertaining with action, comedy, and some surprisingly heavy drama later on in the story. I recommend this is you want some kind of semblance of where the recent anime KonoSuba got its kicks from, and like with Golden Boy, I find myself coming back to it numerous times. (And blasting the opening every chance I get….)

Behold, the pinnacle of every Harem Anime watcher’s starter pack! I have met both ends of the spectrum when it comes to this series, people who’ve watched it, and people who haven’t, and then the gray area, people who’ve heard about it, but have never watched it. While not a classic to me personally since I didn’t get into Tenchi until much later on in my life, it still is classic with how it introduced the harem formula to a mainstream audience, and with how obscure and timeless it was. For those who may not have seen it, the story follows high school student Tenchi Masaki, who accidentally ends up awakening a demon that was sealed in the cave by his grandfathers temple. The demon turns out to be Ryoko, who is a legendary space pirate who came to earth fighting a warrior named Yosho, who is Tenchi’s ancestor. Along the way, numerous ladies come seeking Tenchi out for his abilties that he displays, such as Princess Ayeka, her little sister Sasami, the genius Washu, the clumsy Galaxy Police officer Mihoshi. The series has been adapted into numerous OVAs over the years, with each of them slightly different than the last, being a retelling, spin off or sequel. The pitch of the story remains the same, but with the details changing with every incarnation of the series, such as Tenchi being of royal ancestry in the original series Ryo Ohki, and him being completely human in the In Tokyo series. The Tenchi series is well known for harem anime watchers, and its even greater among 90’s kids that grew up watching this on Toonami, and with over five different series in the franchise and three movies, this is going to keep you occupied for a while. 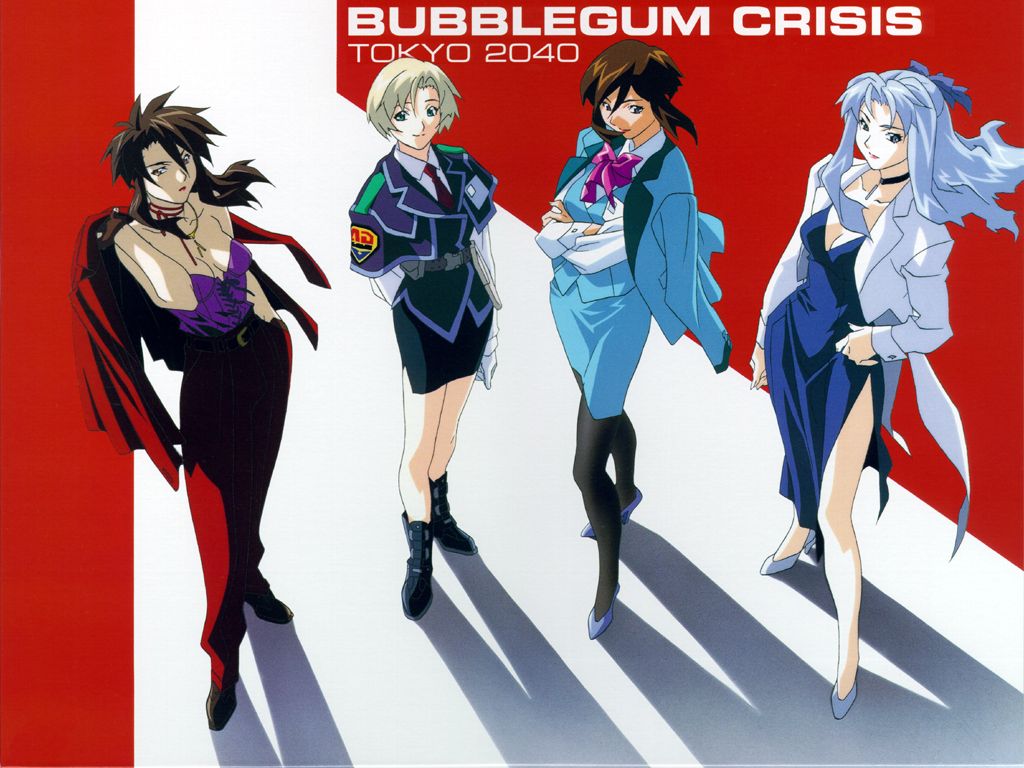 My last recommendation is one that I admittedly haven’t known for long, but I grew to love for the spirit that is brought when it came to strong female characters in anime, and the cyberpunk element as well. Bubblegum Crisis Toyko 2040 is actually a reboot of the original Bubblegum Crisis that premiered in the late 80’s. It takes place in the near future where most of the manual labor that used to be done by humans, are done by these androids called Boomers, which are all run by this huge organization called Genom, which main protagonist Linna Yamazaki works for. On her first day, she runs into a rogue Boomer that is terrorizing the city, and is saved by a woman in a red cybernetic suit, who is part of a group called the Knight Sabers, who pretty much are renegade since they don’t follow any lawful authority, and usually ends up doing their job stopping rogue Boomers. Linna then joins the Knight Sabers, and swears to protect the city alongside fellow members Prissy a rock angel, Sylia a store owner, and Nene, a genius hacker. The anime follows them as they go after rogue Boomers and save the city for certain destruction(cue superhero music). This is for anyone that grew up alongside cyperpunk anime from the late 90’s, such as Ghost in the Shell, that give a subtle commentary over societies growing dependence on technology, that doesn’t beat you over the head. Not only that, its portrayal of strong female characters that take action, while at the same feel human and organic is a factor that has been a celebratory part of this series. Plus the cybernetic hard suits that give you superhuman strength and speed doesn’t hurt either!

These entries that I gave are only a very small presentation of the kinds of anime the 90’s was known for turning out at every interval, that not only displayed top of the line animation and memorable art style, but as well as strong and likable characters that complimented their setting perfectly. These are the ones I remember fondly. What are yours?

A young fledgling from Brooklyn that is simply looking for his own way. I enjoy playing video games, reading manga, watching anime, reading and writing, editing videos, and playing the ukulele in my spare time.